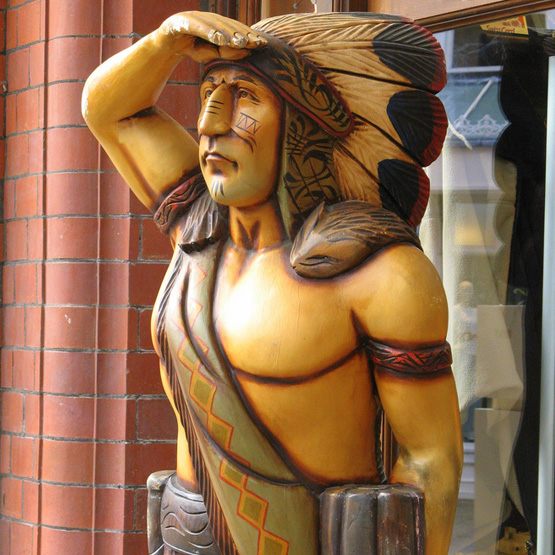 In the past, literacy levels were fairly low, meaning that not many people could read signs. Instead, business owners relied on symbols to let passersby know what to expect inside. A pestle and mortar, for example, represented an apothecary, while three gold balls allowed you to identify a shop as a pawn shop. Popular symbols, such as a barber’s shop being recognised by the red, white and blue pole outside even remain today at some establishments! For tobacconists, the chosen symbol was a carving of a wooden Indian.

A tradition originating from the early 1600s, when tobacco became increasingly popular in Britain, this particular carving was chosen to symbolise smoking, as at the time the tobacco supply was largely coming from Native Americans. By 1650, cigar store Indians became renowned as a form of signage to indicate tobacco products being sold. The carvings made at this time were created by people who had never met a Native American, so many of the early figures were given heavily stereotyped features.

With tobacconists expanding their product lines, restrictions on tobacco advertising and concerns regarding the racial sensitivity of earlier iterations of the cigar store Indian, many of the figures were removed from the fronts of shops and placed in museums, antique shops or destroyed for scrap metal. We are lucky enough to still have one; our very own Chief Heckawi, known locally as Big Smoke, resides at our Windsor store! If you can’t make it down to the store to visit him yourself, then you can also spot him on the Wikipedia page for Cigar Store Indians!

Big Smoke knows his cigars, and you’ll find that he recommends only the finest products! Keep an eye out for his seal of approval.