Humidors are used to keep cigars safe and stored in the optimum conditions to ensure their longevity and to keep them tasting fresh and aromatic, so of course, it is immensely disappointing if a problem occurs that leaves your humidor not working at its best. Problems with a humidor can occur due to both inferior craftsmanship and human error in storing them adequately. Here are some of the most common issues with humidors and how to fix them.

A mouldy humidor is clearly not a great humidor! Mould in the humidor is caused by too much humidity over a long period of time. This can come from a humidifier leaking water back out into the humidor. To resolve this issue, firstly, get your cigars out of there and into a safe spot for the duration of the cleaning stage; there’s no way to scrub out the mould around them! As the smells would infuse the cigars and any liquids would transfer onto the wrapper and ruin it, it isn’t a great idea to use any mould-killing chemical cleaners in your humidor, such as bleach. Instead opt for a natural mould-remover, such as vodka, and wipe the mould away with as little liquid as you can. Then dry out the humidor using a hairdryer for around half an hour. The next step is to sand down the inside of the humidor a little and remove any dust to ensure that all the mould has gone. Throw away any poor cigars that have been defeated by the mould, as they cannot be salvaged and will just re-infect your humidor.

Cigars can become dry if the evaporation surface of the humidifier is small in relation to the humidors size. If this is the case then you will need to swap out your humidifier for a larger one, or one with a regulated air flow function. Another reason for cigars becoming dry is that the wood of the humidor is too dry, so too much moisture is being taken from the air instead. It is more common for this to happen with new humidors. This is an easy fix, as you simply need to re-humidify the wood by wiping the lining with a damp cloth every couple of hours. 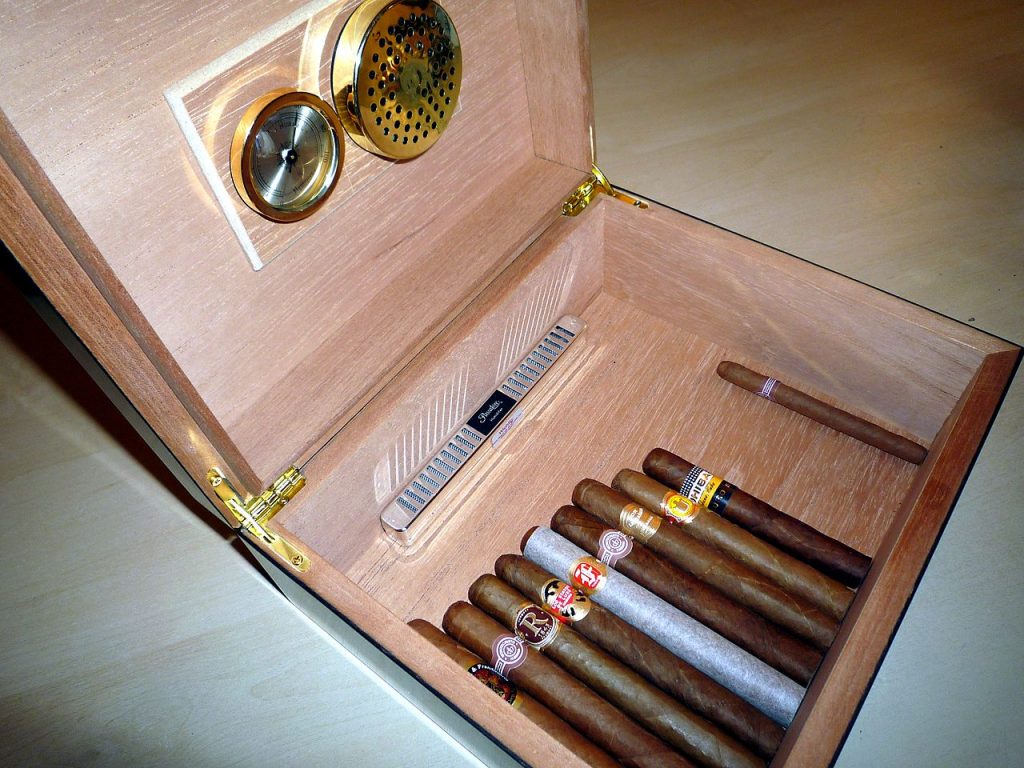 There are a number of reasons for a humidor to smell musty. Firstly, the wood in the humidor may not be the best type for keeping your cigars in the best condition, so re-line the humidor with Spanish cedar, which is the optimum wood type for humidors. Another cause is that some of the surfaces haven’t been treated, for example, any slots in the trays or strips to divide up sections may be untreated. Using a two-component clear lacquer, carefully varnish any areas that have not yet been treated, including inside air holes. Finally, a musty smell can be a symptom of too much humidity. Again, the only way to resolve this is to re-line the humidor with Spanish cedar wood.

The bouquet of a cigar is the aroma the cigar gives off when burning. The smell of a cigar is one of the most enjoyable parts of the smoking experience and helps give the smoker a lot of clues as to the carefully blended mix of flavours present in the stogie, so if your cigars begin to lose this it is important to fix it! One reason for this is that too few cigars are being kept in too large a humidor. While this is a great excuse to buy a whole bunch of new cigars to fill in the gaps, a quick (and cheaper) fix is to place some closed boxes into the humidor to take up some of the room, reducing the amount of open-air space. Another cause is that you are airing your humidor, which is not necessary and can cause problems, such as losing the bouquet. Instead of airing the humidor, if there is too much moisture, lower the humidifiers evaporation surface, or get a humidifier with a regulated system.

Humidor Has Both Damp and Dry Areas

If the humidor has both patches that are too damp and that are too dry, it means that something is stopping the moisture in the air to be evenly distributed throughout the humidor. Most often this will be caused by a tray or drawer. If there are trays, firstly check that any air holes above or below the humidifier are not obstructed by anything, as this could be the main cause of the problem. You can then drill some extra holes into the tray to promote better airflow throughout the humidor.

If the problems with your humidor seem bad enough that it appears to be a lost cause, then maybe it is time to upgrade your gear with a quality humidor from Havana House. It may even give you the excuse to add to your cigar collection too! Do you have any helpful tips for solving problems with humidors that we’ve missed? Let us know in the comments below, or via our social media channels.