Six months ago, the EU bureaucrats introduced yet more legislation dictating what the tobacco industry can and cannot do. Now, it is coming into action so you’d best stock up on your cigarettes and say goodbye to the few liberties that you have left. Whether you choose so smoke cigars, puff on a pipe, have a fag or even a cheeky vape, your pastime isn’t safe from the Tobacco Products Directive.

Menthol cigarettes are over.

That’s right you can say goodbye to those sinus clearing tobacco tubes for good! The alternative is to buy a packet of Marlboro Reds and lather them in Vaporub before smoking. In addition to menthol and mint flavourings being off the market, long and elegant cigarettes are also in the can.

It’s not only ‘womens’ cigarettes that are coming off of the shelves, however, many specialist smokers are going to be unsatisfied too. With huge chunks of the Agio and Villiger lines to be discontinued along with some brilliant cigarettes such as Black Russian and Cocktails from Sobranie. 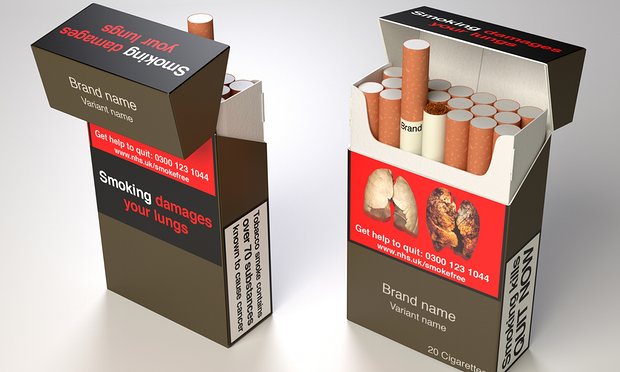 The largest change in packaging yet

You can soon expect to see a huge difference in your cigarette packets. Perhaps the most influential change, that may even be welcomed by smokers is the minimum pack size is set to become 20. This should dissuade children from attempting to obtain cigarettes with their ‘pocket money’ and should also help to stop those on a limited budget from wasting their money.

Health warnings are to be larger and are now featured on the front and back of the pack. The graphic images will remain a similar size, although there are now a new range of grotesque pictures to be printed. There will be no more misleading information such as ‘low tar’ or ‘organic’.

Another huge change is that there will be absolutely no branding from now on. Not even varying fonts between manufacturers. All packages will now be a verminous hue that can only be described as the same colour as the vomit of an olivevore – a person that only eats olives. Furthermore, there will be no more side opening packets. Although, who really cares about that?

If you’re not a cigarette smoker, you may ignorantly assume that you are safe. Oh no, comrades, this is the beginning of the end – cigars are next on the TPD’s hitlist! Under this new legislation, a minimum of 65% of cigar boxes will have to be covered by a health warning.

Pipe smokers will not be happy either. Flavoured tobacco is set to be a thing of the past. It isn’t all bad however, from now on you will have to buy pipe tobacco and flavourings separately, which could lead to some brilliant combinations personalised for your pallet.

Why are the TPD Doing this?

Smoking is the largest cause of early death in the UK. Some estimates suggest that cigarettes kill 100,000 people each year in the UK. Despite this, more than ten million adults are smokers. What is even more eye-opening is that more than 600 children who are aged 11-15 start to smoke every single day. Of course, it’s doubtful that any of them are taking up pipe smoking or have decided to become cigar aficionados!

Whilst some welcome the new legislation, others, even non smokers, consider it a breach of liberty. It seems that tobacco has been disproportionately targeted compared to the genuine risk of smoking. With some tobacco spokespeople going as far to say that the law is a tyrannical rupture in our freedom. ‘What’s next? Standardised packaging for alcohol and sugary drinks?’

Thanks for reading our blog. Unfortunately, we can no longer sell flavoured cigarettes online. However, we still have 6 months to sell them in our stores so come in and stock up! What do you think about the new legislation? Is it what we need to stop children getting into smoking, or are the laws anti-libertarian? Let us know in the comments section below!