Whether you spell it whisky or whiskey, the dark-golden drink comes in many different forms. With signature sips created in different regions around the world, we take a look at some of the main whisky types and how they are made.

How is Whisk(e)y Made?

There’s only one thing to blame for the different spellings of the word, and that’s geography. Whisky is the name given to those whiskies produced in Scotland, Japan, Canada, England and Australia, whereas the Americans and Irish wanted to be different, so their blends are labelled ‘whiskey’ with an added ‘e’.

The exact techniques used to make a bottle of whisky will vary greatly between regions and distilleries, with the end result depending on the grains used and the chosen distilling method. The general process will involve fermenting a grain mash and ageing it in wooden casks. Whisky is a broad category and contains many variations, including Bourbon, Scotch and Rye, so each variety will have its own set of requirements.

All Scotch is whisky, but not all whisky is Scotch! As you’ll notice from the lack of letter ‘e’, and from the name itself, Scotch is solely produced in Scotland. For the most part, Scotch will be made using malted barley and will be aged in barrels made of oak for at least three years. The number that comes after the name on a bottle of Scotch will let you know how long the particular blend was aged for. Due to the barrel types used, Scotch usually presents smoky tones. The exact distilling techniques and flavours of each bottle of Scotch will depend largely on the region of Scotland in which they are produced; however, there tend to be a lot of similarities between each. Those who drink Scotch will usually opt to drink it neat, or with only an ice cube or few drops of water, and will not mix it with other drink types. 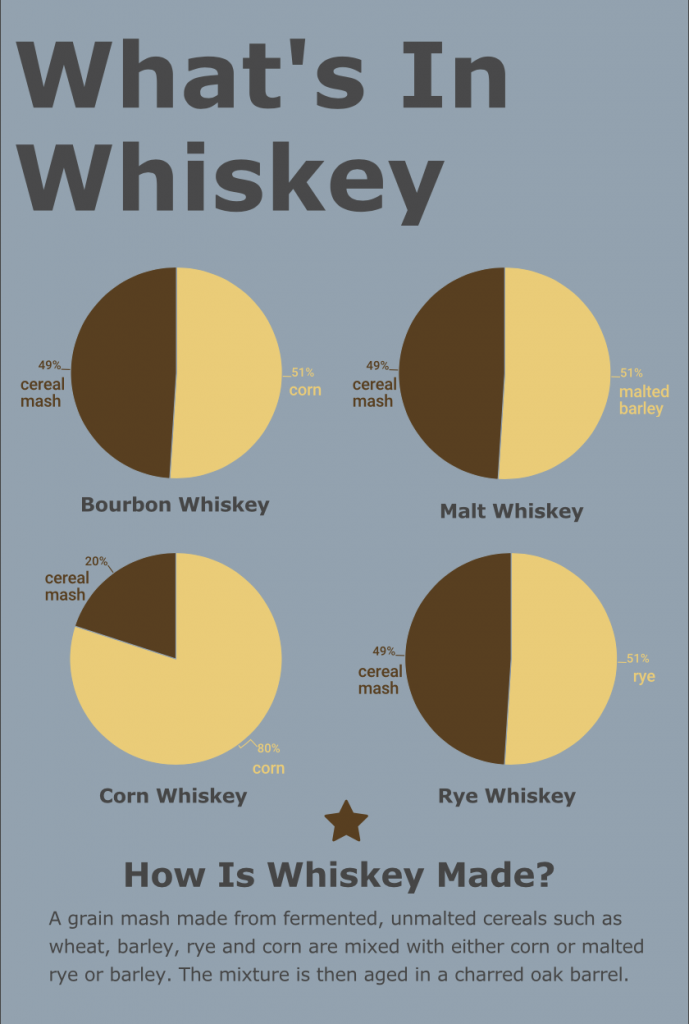 Although Bourbon is not geographically exclusive to Kentucky, more than 90 percent of all Bourbon is produced in the State, so the two are strongly linked. The key ingredient in the mash for Bourbon is corn, which imparts a sweet taste to the whiskey it produces. It must be at least 51 percent corn to be considered a Bourbon whiskey. Further, the strict laws about what can be considered Bourbon also state that it must be aged in barrels made from charred oak, and no other ingredients can be added to impact the flavour. While Bourbon is enjoyed on its own, the sweet taste lends itself to cocktails and mixers.

Typically made in America, Rye whiskey needs to contain a minimum of 51 percent rye to count as such. After the rye mash is made, the whiskey will be aged for at least two years. Rye whiskey is often compared to Bourbon due to its American connection, but will have a far less sweet taste, instead presenting fuller, spicier flavours. Across the border to Canada, Canadian rye whisky doesn’t follow these rules, and a whisky can be called ‘rye’ there even if it does not contain any rye at all!

Whichever whisky or whiskey you decided to drink, sip in style by pairing your dram with quality Montecristo cigars! Do you prefer malt, corn or rye blends? Let us know in the comments below.