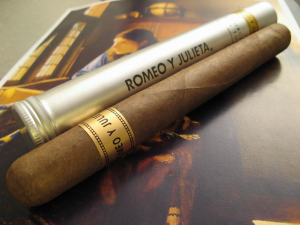 The Romeo y Julieta brand was established in 1873 by budding Cuban cigar enthusiasts Inocenio Alvarez and Manin Garcia. The cigars are full of character and have a very complex background, similar to the Shakespearean play the brand was named after. The reason behind that particular choice of name is in fact quite interesting. Before the brand name was established, the managers at the cigar factory would read books and play to the illiterate staff to motivate them. When asked which story they wanted to listen to, the staff members would always vote to listen to the tragic tale of Romeo and Juliet. (Romeo y Julieta is the Spanish pronunciation)

Romeos are perhaps the most well famous Cuban brand out there due to the supreme quality of the cigars that they produce, which are considered some of the best of their size and shape. In fact, the brand was iconic right from it’s founding, ranking first place at numerous different blind tasting exhibitions between 1885 and the dawn of the 20th century. The gold medals that rest upon the brand’s logo are a homage to this achievement.

However, the brand truly bloomed after it was bought out by Jose Rodriguez Fernandez, the former head of the Cabanas factory in the capital of Cuba. Under Rodriguez’s leadership, the quality of the cigars never changed from the golden originals. What rocketed the brand into the international market was his salesmanship, he was known as the most charismatic man in all of Cuba! Rodriguez travelled Europe and the Americas meeting with wealthy smoking enthusiasts and entering his horse, ‘Julieta’. In races across the globe. Perhaps the most notable personality in cigar smoking, Winston Churchill was captivated by the brand of premium cigars during his post-war visit to Havana.

Rodriguez’s death in 1954 marked the end of an era for Romeo y Julieta. Not long after his death, Fidel’s rebels won the Cuban revolution and began the nationalisation of every cigar brand on the island. The private owners of the brand moved production to the Dominican Republic but the cigars could not compete with the Cuban originals.

Today, Romeo y Julieta cigars are still produced in Cuba under Habanos SA. Though the brand has been nationalised, method of cultivation and production remain as they were in the days of Rodriguez. Tobacco is cultivated in the traditional Cuban fashion using hogsheads to ferment the tobacco leaves. Tobacco plants are first grown indoors for 8 weeks before they are moved outside to flourish in the Cuban sunlight. Romeo y Julieta cigars are grown in the premium agricultural Vuelta Abajo. Almost all of the brands cigars are hand made in a nearby factory, however some of the product ranges are machine made, such as the Romeo y Julieta mini Puritos.

Amazingly, Romeo y Julieta produced as many as 2000 brands at their height. This was due to the cosmopolitan market, many of whom demanded that their own personalised cigars. Sir Winston Churchill did not demand to have his own vitola named after himself, Rodriguez gave him one anyway – probably to ride off the free publicity. Churchill’s favourite cigar at the time, the Julieta No.2, was renamed to the Churchill and has since become Romeo y Julieta’s flagship cigar! Numerous other cigars from the brand have also been named after the late British prime minister, such as the Short Churchill, Wide Churchills and the Petit Churchills. Robust, complex cigars that are medium in strength are characteristic of this brand.

Romeo and Julieta are known for more than just their Churchills, however, traditionally, Romeo y julieta were known for the exhibition series until Sir Winston announced his love of the brand in 1946. Nowadays the brand crafts some brilliant cigars that are smoked all over the world such as the Belicosos, the Cedros and the Julietas. All of which are available in different sizes and with or without a cedar lined tube.

Next time you are in a Havana House shop be sure to have a look at our vast range of Romeo y Julieta Cigars. Alternatively, you can have a look right now at havanahouse.co.uk/product-category/cuban/romeo-y-julieta/. What is your opinion of Romeo y Julieta cigars? Be sure to leave a comment down below, we love to read them and interact with the community!