For the stogie lovers among us, as with anything that is a passion, it is common practice to indulge in the culture and follow trends that are associated with said pastime. So, if you are looking to develop your love for the cigar world and all that is associated with it then it is integral that you are brought up to speed on the smoking jacket, a staple for any aficionado.

We’re going to talk you through all you need to know about this smoking accessory, so why not sit down with your favourite stogie, and discover the vitals? 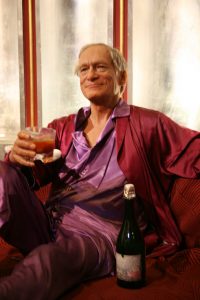 The History of the Smoking Jacket

During the early 17th century, with international trade improving and progressing, it assisted in becoming fruitful across Europe with the importing favoured goods into North America, India, and large parts of Asia.

Included in the list of goods were items such as spices, coffee, textiles and of course, tobacco. The majority of gentlemen at the time weren’t fortunate enough to possess such vast wardrobes that today’s men enjoy and therefore would do whatever they could to protect their most cherished garments. Cravats and overcoats, as well as tunics, may well have just been magnets for the odour of tobacco, and as a result, men began to wear robe de chambres as an over garment when enjoying a smoke at home. Predominantly made of silk, and with the changing of trends, it became fashionable to have your portrait taken at the same time a sporting your favourite dressing gown.

One of the first documented mentions of the dressing gown came from 30th March, 1666, in the private diary of Samuel Pepys.

Pepys was known to be an elegant gentleman who sadly didn’t have the financial means to acquire his own robe, and therefore rented one. In Pepys’ diary that day, he wrote ‘Thence home and eat one mouthful, and so to Hale’s and there sat until almost quite dark upon working my gown, which I hired to be drawn (in) it—an Indian gown, and I do see all the reason to expect a most excellent picture of it.’

With years passing, ideas altered and the dressing gown became reserved for private wear and was chiefly worn following the master had changed from his evening clothes into his pyjamas. Due to most abodes featuring a lack of appropriate heating and insulation, the dressing gown was a source of greatly-received warmth on cold nights.

The gown was an idyllically practical garment, but still carried a wealth of sophistication and beauty. Reserved for the eyes of wives, sometimes children, occasionally valet, first footman or butlers of great houses, or perhaps the lady’s maid in rare scenarios, the dressing gown would not be seen by anyone else.

As this trend found increased levels of popularity, the smoking jacket’s evolution continued. Most noticeably, changing from a silk robe de chambre into a shorter, mid-thigh length jacket that was designed with the specific intention of absorbing smoke, thus protecting the gentleman’s clothing from falling ash, in mind.

By the mid 1800s, Turkish tobacco had become remarkably popular in the circles of the distinguished gentlemen, mainly as a result of the Crimean War. Traditional protocol stated that after dinner, the gentleman would retreat to the parlour room to participate in a smoke of their favourite cigar or pipe tobacco, accompanied by their favourite digestif.

By the turn of the Victorian and Edwardian eras passing, dinner jackets were synonymous with the gentlemen of the time as opposed to the more formal tailcoat. The smoking jacket continued to find its place and fresher versions were fashioned with altered closures to allow gentlemen to sport them in their own residence while dining, which meant they didn’t have to change after they had eaten.

A new era for the smoking jacket

By this time smoking jackets had found their way to being tied with pure elegance and comfort, while also being one of the first items to ever be considered as both. Fast forward to the 1950s saw more casual attire finding its way into what were always previously seen as more formal scenarios.

It was a prevalent sight to see the smoking jacket becoming being donned outside the confines of the house, and not just within. Style icons of the time, including Cary Grant, Dean Martin, and Fred Astaire could all be seen wearing smoking jackets out in public, and not just in private.

One of the most renowned wearers of the smoking jacket is of course, Hugh Hefner following the release of the first issue of Playboy in December of 1953. Marilyn Monroe was on the cover and she became such an superstar that Mr Hefner ended up becoming an instant celebrity!

At its most fruitful time, the smoking jacket would be worn by previously mentioned names such as, Dean Martin and Frank Sinatra, who not only partied, but performed in Las Vegas, wearing smoking jackets. The pair would combine their jackets with a black bow tie, formal trousers, and Prince Albert slippers or patent Oxfords, to pull off the most elegant of looks.

Now that the you are aware of the history of the smoking jacket we can move on to the style and features associated with smoking jackets.

Today, you can source a host of styles for jackets that are referred to as smoking jackets. Yet, a traditional smoking jacket simply remains as a mid-thigh length jacket that’s made of velvet with a quilted satin shawl collar. Turn up cuffs, and a tie belt made of velvet that is often decorated with tassels at the ends to complete the classic jacket. The majority of smoking jackets with be designed with three pockets on the outside and typically a pocket reserved for cigars. The classic jacket will almost always be ventless in the back and the sides.

How a Smoking Jacket Should Be Worn

How one wears a smoking jacket will allow the wearer room for personal taste. There are three general opinions:

Finally, one must consider the etiquette of wearing a smoking jacket. The jacket is very much an all-purpose, yet supremely elegant garment and as such can be easily identified for the appropriate use from these two distinct styles:

We do hope that this has given you the information you were looking for and that you can now feel more connected with the world of cigars and all associated with it. For more information on the products we offer, contact our helpful team at Havana House, or visit our cigar shop online.