Whether you’re a beginner or have been smoking for years, when talking about cigars, sometimes the fun of the smoke can be lost in the confusion of new terminology. Looking for a new cigar to try can prove a real challenge if you’re unsure about what some of the descriptors mean, so we’ve put together a handy glossary to help you discover exactly what cigar brands mean in the labelling of their stogies!

Ageing Room – each factory will have a room solely dedicated to ageing their rolled cigars.

Aroma – this term is used as a way to describe either the taste or smells that are present in a particular cigar.

Band – A strip of paper that wraps around the cigar. While historically, they may have been used to hold the cigar together a little better, nowadays they are almost purely for decorative purposes.

Binder – A coarser and more robust tobacco leaf used to hold the filler in place, as well as acting as a more suitable surface to roll the wrapper leaf over.

Blending – A number of different types of tobacco leaves are combined together to produce a variety of complex tastes.

Bloom – a white powder that appears on the cigar. At first glance, you may mistake it for mould, but it is actually a feature wanted by many cigar lovers as it reveals it has been aged for a long time. Bloom appears when the oils from the tobacco crystallise over time.

Booking – a method for rolling cigars in which the filler leaves are placed one on top of the other and then rolled up like a scroll. This is the most commonly used method for cigars made in Honduras.

Bouquet – the smell that is omitted from the combined aromas of the cigar.

Box-pressed – When cigars have been packed tightly into a box they can end up with a slightly square shape to them.

Bundle – a bundle of 25 or 50 cigars that are wrapped in cellophane rather than in a wooden box. These are likely to be cheaper, due to using less packaging. 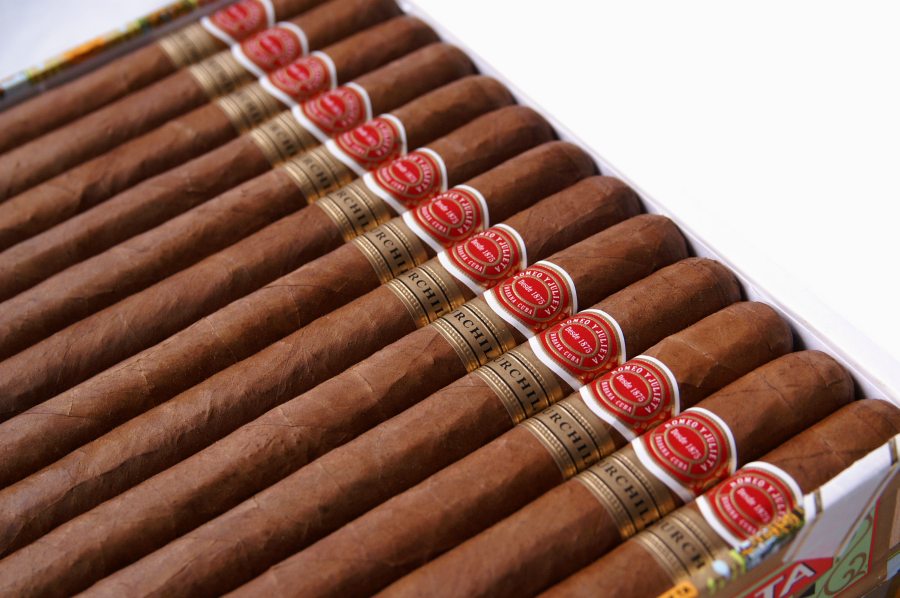 Candela – a cigar wrapper which has only been quickly fermented and cured, leaving it with a green colour.

Canoeing – A cigar fault where one side will burn a lot quicker than the other.

Cap – an essential part of a cigar, this piece of wrapper leaf is glued over the head of the cigar to keep it in place. When the cigar is smoked, the cap will be cut off.

Cedar – the type of wood used to line cigar boxes. This particular type is chosen as it is good at absorbing moisture, making it perfect for use in humidors.

Cedar spill – A small strip of cedar that can be used to light a cigar.

Churchill – named after the famous cigar-smoking former Prime Minister, the Churchill is the name of a cigar size (or vitola), and it is usually around 7 inches long.

Cigarillo – a shorter and thinner cigar that is made using a machine.

Claro – a very pale cigar wrapper colour. To achieve the pale colour, it tends to be grown in the shade.

Colorado – one of the most common cigar colours, the Colorado is a medium-brown shade.

Connecticut – Connecticut is home to the Connecticut River Valley, a region known for producing shade-grown tobacco leaves and wrappers with a great aroma.

Corojo – a type of seed used in Cuba, it is most famously used by the brand Camacho.

Corona – the benchmark size for cigars, at around 5 inches long. There are many other cigar shapes and sizes, but this is the standard and one of the most popular sizes available.

Culebra – three Panatela cigars that have been braided together. They are smoked individually, but when unwrapped will appear slightly wonky due to the plait.

Curing – the process in which tobacco leaves are hung up to dry before they are fermented. The leaves will develop from a green-yellow colour to a deeper brown tone if they are left for long enough.

Draw – the act of sucking air through a lit cigar. Handmade cigars can cause variations in the draw, as having a cigar that is packed too tightly or too loosely can make it either too hard or too easy to draw the smoke through. This can then affect the temperature at which the cigar burns.

Dry draw – before the cigar is lit, some smokers suck air through after cutting it to detect any of the more prominent aromas present. It can give you a hint of what to expect in the smoke to come! 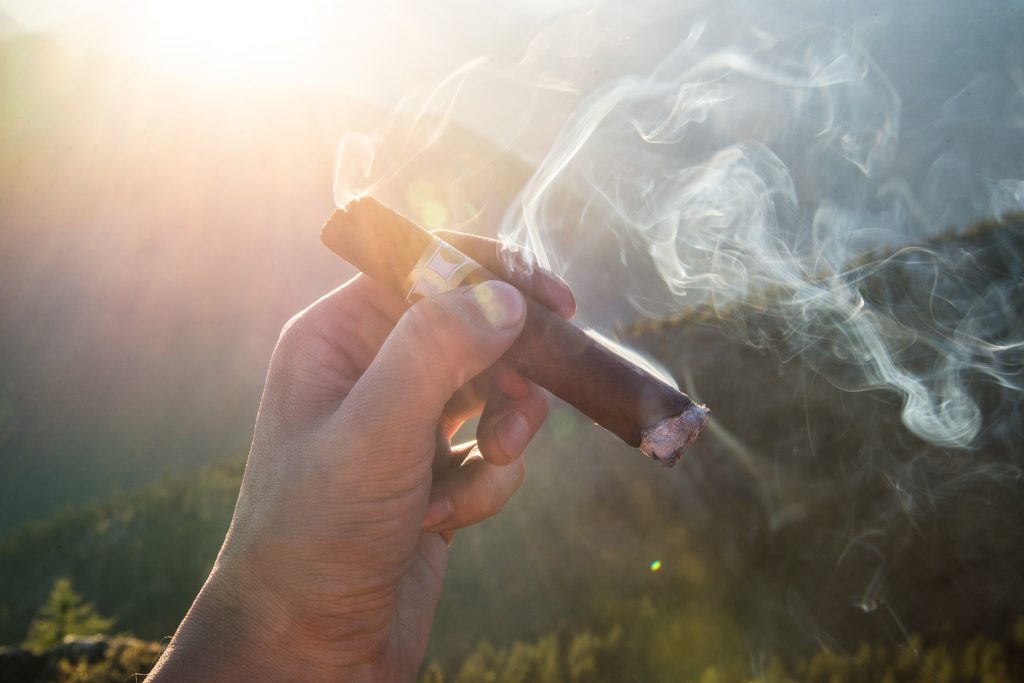 Entubar – this is a more advanced method of rolling a cigar, in which the leaves are folded back on itself and bunched together, like an accordion, or fan. This fold type originated in Cuba and can also be known as an accordion fold. It is believed to be the better folding technique for allowing proper air flow through the cigar, allowing it to both draw and burn more evenly.

Fermentation – after the tobacco is cured, it is moistened again and heated to begin the fermentation process. This helps to both remove any ammonia present and can allow the tobacco to reach its full flavour and aroma potential.

Figurado – any cigar shape type that isn’t straight. This can include popular vitolas such as Torpedo or Perfecto.

Filler – the leaves that make up the core body of the cigar. This is the section that produces smoke, and a lot of the main flavours of the cigar.

Finish – used when discussing the taste of a cigar, the term refers to the taste that remains in your mouth after taking in a puff. Milder cigars will not have a particularly intense finish, but fuller-bodied sticks will certainly leave behind a more distinctive lingering flavour.

Foot – the end of the cigar that you light.

Gorda – meaning ‘fat’ in Spanish, this cigar is a chunky corona, with a 46-ring gauge.

Guillotine – a cigar cutter with a flat blade to cut the cap of the cigar.

Gum – a natural glue used to stick the wrapper leaf and cap down.

Habano – a cigar that is made only using tobacco from Cuba.

Hand-rolled – a cigar made entirely by hand. They are likely to use the highest-quality wrapper lead and long filler.

Head – the end of the cigar that is put in the mouth.

Hot – a cigar that is not sufficiently filled and draws too quickly will burn hot. This can cause the cigar to have some undesirably harsh flavours.

Humidor – a box (or even a room) used to keep cigars stored in the ideal conditions.

Ligero – a type of filler tobacco with a bold flavour. This lead comes from the top of the plant.

Long filler – when the whole leaf or large pieces of leaf are used as a filler so that it runs through the entire length of the cigar, rather than lots of little bits of tobacco packed in. Usually, cigars with long filler will be handmade.

Machine-made – a cigar made using a machine alone. They tend to have thicker wrappers and use cut filler instead of long.

Maduro – a very dark coloured wrapper, that can be deep red to almost black. This shade is gained from either excessive exposure to the sun or a lengthier fermentation time.

Oil – a cigar that has been aged and humidified well will display a sheen of oil on the surface of the wrapper. This is a desirable trait, as the natural oils add some incredible flavour.

Oscuro – the darkest wrapper shade, with an almost black appearance. It is quite rare to find cigars this dark.

Panatela – a long, but very thin cigar shape. These are used to form Culebras.

Parejos – a cigar that has straight sides and a rounded end, such as Coronas. This is the most classic cigar shape.

Plug – a block that can occur in the middle of your cigar when smoking that makes drawing properly a bit challenging.

Punch – a cigar cutter that makes a hole in the cigars head, rather than fully removing the cap.

Rolling – the assembly of a cigar. The tobacco leaves are bunched and rolled together. 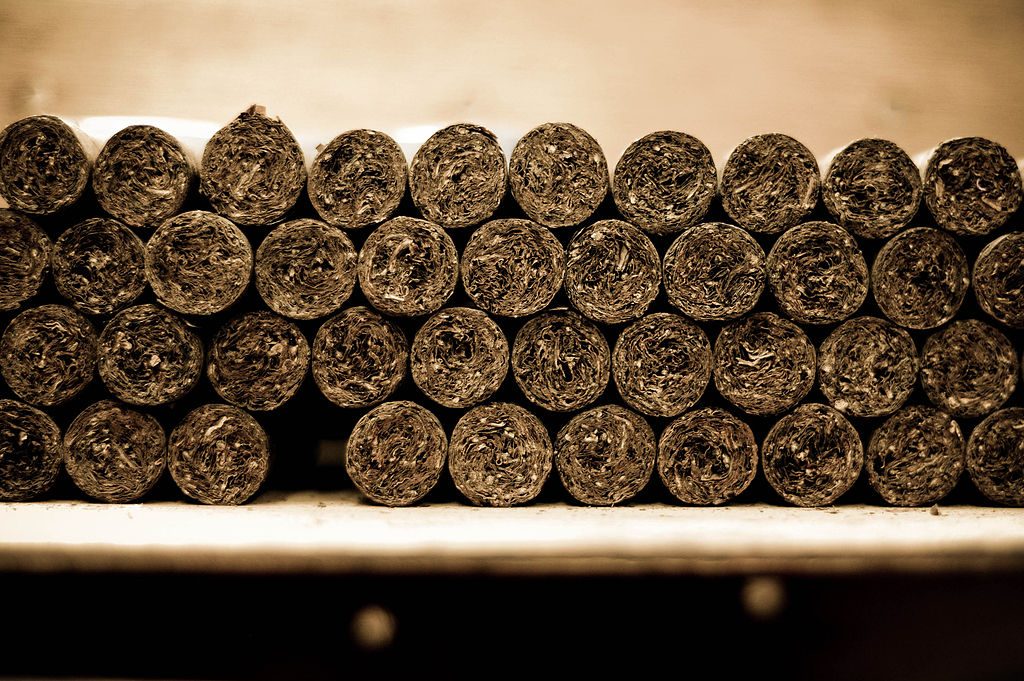 Shade-grown – tobacco that has been grown under the shade of a cheesecloth tent, known as a tapado. Having less sunlight hitting the leaves created a thinner and more elastic leaf.

Short filler – smaller pieces of cut tobacco used to make the filler, mostly in machine-made cigars. It tends to burn hotter and faster than long filler.

Shoulder – the curved section at the end of the cigar where the wrapper meets the cap.

Stack – when ash stays at the end of the cigar as it burns rather than falling, or being tapped, off. Many smokers consider this a desirable trait, as it indicates that the cigar is great quality, and it can even help maintain a good smoking temperature. Some try to keep the stack going as long as possible, in an act known as ‘stacking’, and can compete with other smokers to smoke an entire cigar without dropping any of the ash!

Stogie – a slang term for ‘cigar’.

Sun-grown – tobacco that has been grown in direct sunlight. This will produce a thicker leaf with bigger veins.

Triple cap – some Cuban factories will apply three caps to a cigar to ensure that it is secure. This can also help to make sure the cigar won’t unravel.

Tubo – a metal tube that cigars can be stored and transported in.

Tunnelling – a problem with the burn, where the cigar filler burns faster than the wrapper, creating a tunnelling effect.

V-cut – when a v-shaped cut is made in the head of the cigar, instead of cutting or punching the end.

Vein – the tobacco leaf will have veins that can sometimes be visible on the wrapper. For the most part, very noticeable veins are considered unattractive, as they can indicate an inadequate curing time. However, some cigar makers will intentionally leave very visible veins.

Vitola – the term used to refer to different sizes and shapes of cigars. For example, a Corona or Perfecto is a vitola type.

Wrapper – the leaf that covers the outside of the cigar, holding the filler and binder together. It makes the cigar look good and can hold some incredible flavours that add delicious aromas and tastes to the smoke. Wrappers can come in a variety of colours depending on how long the leaves have been aged.

If you want more information on cigars, be sure to check out the Havana House blog for guides on everything from the basics of smoking to the complex art of pairing!